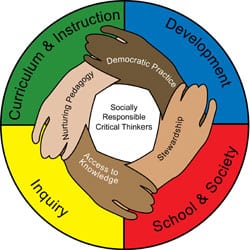 Four conceptual strands flow through all teacher education programs at Maryville. Arising from our mission and the research on the profession, these strands give structure to the reflective practitioner model we use: a developmental strand, a curriculum and instruction strand, a school and society strand, and finally, a research and inquiry strand. These four strands specify the areas of reflection and professional preparation developed throughout the program. They also provide the framework for the teacher education program curricula and programmatic outcomes. Candidates at Maryville will be expected to articulate their own growth and development in each strand of the program as they progress through the program and at the time of exit. It is the faculty’s belief that exploration of each of these strands is necessary for all of us in our individual and collective professional growth and development.

Humans grow and develop throughout every aspect of their lives. Teachers must be able to understand how their students’ growth and their own personal and professional development have an impact upon the teaching/learning process. Understanding how children and young adults grow and learn socially, physically, emotionally, and cognitively is essential for every teacher. At Maryville classical theorists (Dewey, Piaget, Erikson, Vygotsky, Skinner) inform this study, as do more contemporary scholars of human development (Belenky et al, 1986; Kamii & Houseman, 1999; Comer, 1980; Scales, 1999; Noddings, 1992; Tatum 1997; Vinz, 1996; Delpit, 1995; Nieto 2000; Ogbu, 1994; Chess & Thomas, 1987). An emphasis on the range of normal development is supplemented by study of exceptionalities, abnormalities, and variations in development that are influenced by gender, socio-economic status, culture, and ethnicity (Crain, 2000; Oakes and Lipton, 1999; Sadker & Sadker, 1995).

Emerging research on professional growth and development throughout the lifespan of a teacher also enhances self-knowledge (Danielson, 1996; Bernhardt, 1999; Evan, 1996; Elmore & Burney, 1999; Ball & Cohen, 1999; Hammerness et al., 2005). Studies of the stages of teachers’ professional development help each teacher assess the next steps, the most appropriate ways to set goals and grow as a professional and a person.

Teachers are ultimately responsible for what is taught and how it is taught. They must spend each day of their professional lives weighing decisions about how to best spend the instructional time in their classrooms and what resources to best use. Ultimately, these decisions are made from knowledge of child development, reflection upon national, state and local guidelines and their beliefs about the purposes of schooling, as well as a deep appreciation for schooling in the context of the local community (Cohen, McLaughlin, & Talbert, 1993; Henderson & Kesson, 1999). All Maryville University teacher education candidates (whether preservice or inservice) are expected to become more familiar with standards, policies, and publications of the learned societies to inform their work. Curriculum and instruction will be guided by those standards, including the ways in which teachers plan for the children with exceptionalities in their classes.

Teachers will learn to reflect upon their individual curricular and instructional decisions. In particular, our work with the National Network for Educational Renewal has suggested that we MUST reflect upon the access to quality curriculum and instruction for our poor and minority children, since education is organized around middle class norms for schooling (Wasley, Hampel & Clark, 1997; Darling-Hammond, 1997, 2007; Ladson-Billings, 1994, 2000; Delpit 1995; Brooks & Brooks, 1993; Marlow & Page, 1998; Cole, 1995; Basile, 2004; Foster, 2004). The agenda of the National Network for Educational Renewal has also emphasizes the importance of the intersection of the faculties of the arts and sciences disciplines and the professional training of teachers in the School of Education. The collaborative culture in which candidates make their instructional decisions must include increasing access to technology to enhance students’ access to knowledge (AACTE Committee, 2008; Mishra & Koehler 2006). Each teacher must learn to use this technology responsibly (ISTE, 2008).

In addition to the philosophical and overarching issues related to curriculum, teacher education candidates must be conversant about the content they teach. Reflection is informed by the study of the nature of knowledge and pedagogy in the disciplines. National, state and institutional standards based upon the best thinking in each area will become the basis for further reflection. (See for example, Diver, 1985; Keller, Alters, 1997; NCTM, 2000; Ball, 2000; Chazan, 2000; Darling-Hammond & Bransford, 2005)

In today’s climate that emphasizes accountability, reflection must include an even more careful analysis of the effects of each teacher’s curricular and instructional decisions on the assessment of student growth and development. Teacher education candidates will be asked to reflect upon the appropriateness and effectiveness of short and long-term assessment methods (Wiggins, 1998; Goldhaber & Brewer; Barnhardt, 1999, Senge et al., 2000; Simons & Elliot, 1990; Shepard, 2005).

Everyone has been to school, but few school clients spend a great deal of time reflecting about the long term, rather than immediate or opportunistic, purposes of schools. Teacher education candidates at Maryville University reflect critically about the purposes of schooling (Dewey, 1966; Giroux, 1992; Greene, 1995; Beyer and Apple, 1988; Liston, Goodlad, 1994, 1997; Goodlad, Soder & Sirotnik 1994; Fenstermacher, 1994; Hollins, 1996; Michie, 1999; Delpit, 1995; Noddings, 1992; Fullan, 1999; Sizer and Sizer, 1999; Goodlad & McMannon, 1997; Goodlad, Mantle-Bromley & Goodlad, 2004; Goodlad 2004). The School and Society strand addresses the most important philosophical underpinnings from which a teacher operates. Critical examination of the purposes of schooling in a diverse and democratic society is essential, as is the reconciling of many essentialist educational policies and operations in a post-modern society (Banks, J. 1997; Soder, 1996; Oakes & Lipton, 1999; Apple & Beane, 1995; Combs, Miser, & Whitaker, 1999; Michelli & Keiser, 2005). Reflecting on the purposes of schooling is one of the moral responsibilities of each preservice and in-service candidate in Maryville’s programs.

Asking candidates to reflect upon the fundamental questions of “Why schools?” and “What are the purposes of schooling for the individual and the society as a whole?” are absolutely critical. Learning about and assessing one’s personal responsibilities to assist individuals, as well as the community of the school are necessary. This reflection should inform not only the curriculum and instruction within the school day, but also the reflection on action as the teacher reaches out to the broader community, particularly to the parents, families and community members that the school serves (Noddings, 1992; NAEYC, 2000; Comer 1980;Hollins, 1996; Jackson, Boostrom & Hansen, 1993; Gordon, 1999; Michie, 1999; Clark, 2004; Posner, 2005).

In an effort to address this issue of schools in a societal context, Senge and others have written about the need to take a holistic systems approach to maintain healthy organizations. Preservice and in-service candidates will learn to reflect upon the role of schools, the varying organizational structures of schools, how schools interface with the community and the transformative nature of the work that they are being asked to do (Evans, 1996; Senge et al, 2000; Fullan & Heagreaves, 1992; Westheimer, 1998).

On what basis do teachers and teacher candidates assess their reflection? This strand not only acknowledges, but validates as essential, the role of current research and inquiry as a means for reflection on teacher development and practice. But this process is truly synergistic; past practice and the teacher’s current practice continually inform the ways that the teacher’s theory base and practice continue to develop (Ball & Cohen, 1999; Kennedy, 1999; NCATE, 1999; Hubbard & Power, 1993; Cochran-Smith & Lytle, 1993; Clark, 1995; Cohn & Kottkamp, 1993).

Reflection must be ongoing if it continues to inform practice on action and in action. The ultimate bases for reflection are as elusive to classification as current understandings of the workings of complex systems; there are no singular formulas for inquiry (Kennedy, 1999). Reflection in our program is inclusive of all types of inquiry, e.g. action vs. classical, qualitative vs. quantitative, short term vs. long term. For each preservice and in-service candidate in our programs, even with the stated dilemmas, determining how to answer fundamental questions of practice must be addressed in a life of reflection that includes research and inquiry. Action research, group inquiry, the work of critical friends, as well as other types of research and action from systematic data collection are all parts of the program (Lieberman & Miller, 1999; Duckworth, 1988, 1996; Fosnot, 1996). In the current state and federal climates that emphasize teacher accountability, reflection on student work samples (Brodsky, 1999; Pancratz, 2000) provides yet another method of inquiry that helps create connections among these strands and the others.

Approaches to inquiry for teachers have been controversial; some suggest that teacher inquiry is a non-practical construct of university faculty (Hausfather, 1997). But experience with preservice and in-service candidates at Maryville University and many other institutions suggests otherwise.

Development, curriculum and instruction, school and society, research and inquiry become the four overarching bases for reflection within School of Education programs. While each of these strands appears discrete in that we have identified competencies/outcomes for each, candidates are asked to address the multiple connections that exist among these knowledge bases. Indeed assignments often require students to analyze and “see” the parts, while also asking questions and testing conclusions that encompass knowledge across the four strands.