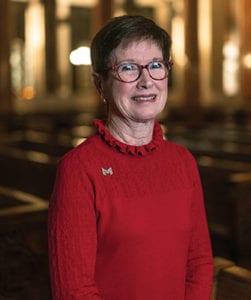 Suzie Weiss’ love of Maryville runs as deep as her family legacy, which stretches back more than 100 years. Her grandmother studied at the old campus of Maryville Academy and in 1940, her mother, Kathleen Desloge, graduated from the original Maryville College. Two aunts and numerous cousins also earned degrees from Maryville.

Much of Weiss’s life’s work is focused on honoring her Maryville ties, her family and her Catholic heritage. She served two terms as board president for Villa Duchesne-City House Alumnae, and received their Alumnae Association’s Très Bien Award in 2001. She is a co-leader of Maryville’s Sacred Heart Advisory group, eager to carry out its mission of keeping alive the Sacred Heart tradition. She also serves as board secretary for Friends of the Cathedral Basilica. The group raises money to improve and maintain the century-old St. Louis landmark, located in the parish in which her grandparents lived and where her mother was baptized.

To commemorate her Maryville class’ 50th reunion, Weiss and her husband, Charles, made a substantial gift. The money was earmarked to support scholarships, the value of which Weiss can appreciate from her own experience: “Scholarships helped me get through Maryville,” she said. She first chose the University because of her mother and now, decades after her mother’s and her own graduation, Weiss feels “It’s important to give back.”