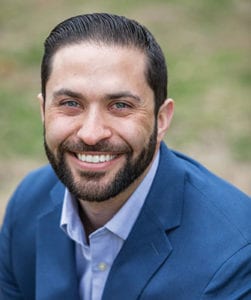 Every day, as Adam Boyer makes sure 60,000 people have well-functioning computers and cell phones, he’s really working toward a larger goal: sending astronauts to the moon, and eventually to Mars. In his job with the information technology firm Leidos, Boyer is the senior finance and business operations manager for an almost $3 billion services contract with NASA.

Boyer is working to set up Space Bars, similar to Apple’s Genius Bars, at all 11 NASA centers, and implementing a new backup system for all of NASA’s data. He arrived at Leidos from Boeing, where he was hired after four semesters of internship, secured with the help of Barbara Petzall, PhD, past professor of management and leadership.

But Boyer’s life isn’t just about work. When he was a junior, a baseball teammate’s family lost their home in a fire. Boyer helped pass a baseball helmet around campus to raise money, collecting $1,750. They also approached the administration, and the University agreed to waive the student’s tuition for the semester. Boyer wants to make sure his career path leaves time for working for causes that are dear to his heart. “I want to be successful as an executive, but I also want to have the flexibility to be successful in other areas, like helping people.”