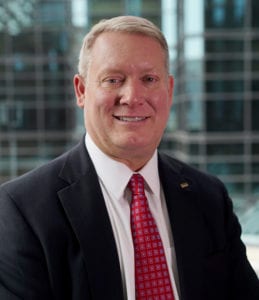 As an undergraduate student-athlete and captain of Maryville’s soccer team, Stephen Kitts, ’83, learned the powerful results of putting team before self. Today, his dedication to building outstanding teams, empowering individuals and sharing in others successes are the cornerstones of his 30-plus years as a successful banker and leader.

Stephen spent his early years on the trading desk followed by five years in sales and 17 years in management of the bond department. He joined UMB Bank in 2007 as executive vice president of investment banking. Stephen was an asset liability committee member and has been a part of the senior management team of a $20 billion banking institution.

Stephen’s mother, Nancy Dietrich Kitts, ’58, was an active member of the alumni board. He carried on her tradition by serving as president of the Alumni Association, and he was instrumental in developing an Alumni Leadership Conference which led to new programming and the expansion of Alumni Weekend. Prior to joining the board, Stephen served on the President’s Young Men’s Advisory Committee.

He has also served as chairman of the endowment committee for the Lake Mary Center in Paola, Kansas. In addition to his BS in business administration from Maryville, Stephen has an MBA from Rockhurst University.