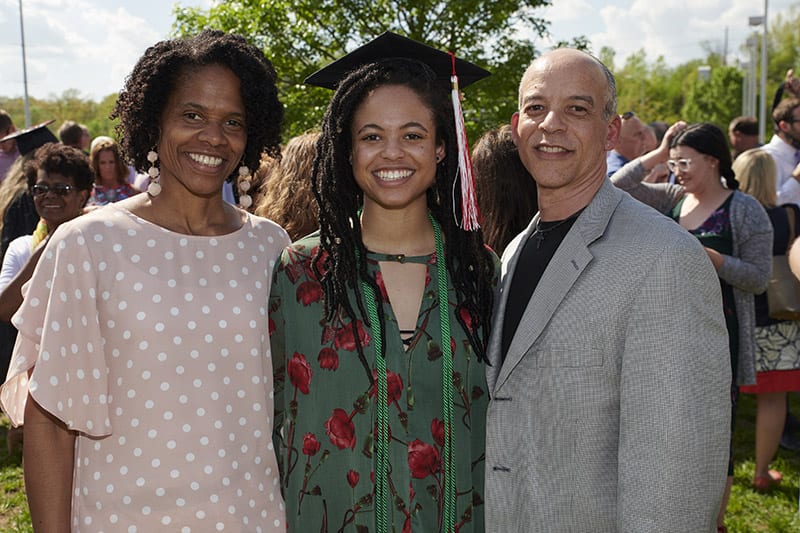 You could say Jasmine Scott’s path to graduation didn’t go according to some templated four-year plan. Rather, her journey to commencement involved stops, delays and injury.

But she eventually heard the right tune to continue studying and then working with music.

Scott first began her undergraduate studies in violin performance at Indiana University. After she sustained an injury to her wrist, she returned home to Illinois to rehabilitate her torn tendon. During the break, a friend mentioned he was graduating from Maryville with a degree in music therapy, which piqued Scott’s interest.

“I did some research, and I fell in love with the idea that I could use music to help heal people,” says Scott. “Music activates the brain in certain ways that words cannot.”

A music therapist provides treatments to clients by having them create, sing, and/or dance to music, according to the American Music Therapy Associaton.

Then I realized that not everybody’s path is the same, and it’s OK if you’re going to be in school for two years longer. Just don’t give up; go for what you really want to do.

Being around music was important to her, and the program allowed Scott to incorporate that passion into her career goals. During her time at Maryville, Scott participated in real-world practicums where she used music to help people who have Alzheimer’s, cerebral palsy or autism.

Scott understood she didn’t have to follow prescribed steps in pursuing her college education.

“I thought I was just going to be in college for just four years and get out and get a job, but things happened, and I felt kind of behind,” says Scott. “Then I realized that not everybody’s path is the same, and it’s OK if you’re going to be in school for two years longer. Just don’t give up; go for what you really want to do.”

After graduation, Scott—the College of Arts & Sciences Excellence in Music award winner and a nominee for induction into Alpha Eta National Honor Society—hopes to continue working in music therapy for an organization she interned with this spring.

“It’s a very rewarding experience to use music to help people,” she says.