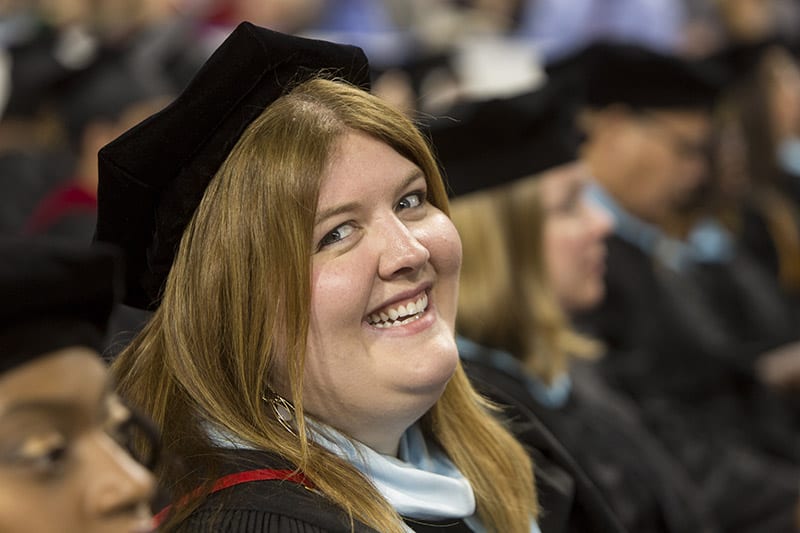 In May, Allison Fuller walked confidently across the Maryville stage to receive her doctorate in higher education leadership.

Only a decade before, doctors said she might never walk normally—or communicate fully—again.

Their dire predictions came after a routine tonsillectomy between her freshman and sophomore years of college turned into a medical emergency. Fuller was recovering in her parents’ home when she aspirated liquid into her lungs. Her father found her unconscious and called 911.

“At the hospital, they told my parents to prepare for me to die,” Fuller says. “And they put me into a medically induced coma.”

I’m so glad that that crazy, horrible situation happened. Without that, I wouldn’t be doing what I’m doing now.

After several weeks, she was able to leave the hospital, but a lack of oxygen had caused significant brain damage.

“A neurosurgeon said the best I could hope for was a minimum-wage job,” Fuller recalls.

She entered an intensive rehab program, where she struggled to accomplish simple tasks and pay attention.

“I’d had a 4.0 in high school and college, and now I can’t watch TV and listen at the same,” Fuller says. “It was a pretty big shakeup. I was so angry.”

But she persisted, and her young brain began to heal and form new pathways. She went back to college. With help from a disabilities office, she graduated, then earned a master’s in secondary education. In 2015, she entered the doctoral program at Maryville.

Fuller, who recently joined the University staff as director of Maryville’s Office of Disability Support and Success, draws on her personal experience to help students with disabilities.

“I’m so glad that that crazy, horrible situation happened,” Fuller says. “Without that, I wouldn’t be doing what I’m doing now.”