The Sister Mary Byles Peace and Justice Prize and Lecture honors the legacy of an esteemed professor of humanities and theology at Maryville University. Throughout her long career at Maryville, Sister Mary Byles, RSCJ, was well-known among religious leaders in the St. Louis area for her significant efforts to further ecumenical and interfaith relations.

The prize and lecture in her name draw attention to the moral and ethical issues still existing in modern society, and further the University’s mission to instill a sense of social consciousness within its graduates. The annual event is free and open to the public.

Check back soon for more information.

As a young Religious, Sister Byles taught in secondary schools operated by the Society in Albany, New York, and in Noroton, Connecticut. In 1945 she was appointed to the faculty at Manhattanville, where she taught history and religion until 1953. She also served as dean of women, foreign student adviser and moderator of student activities. 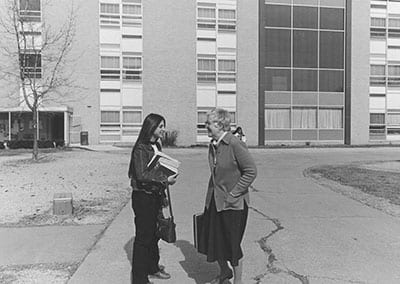 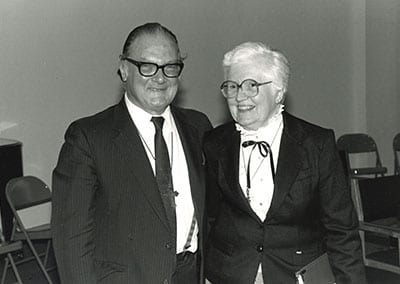 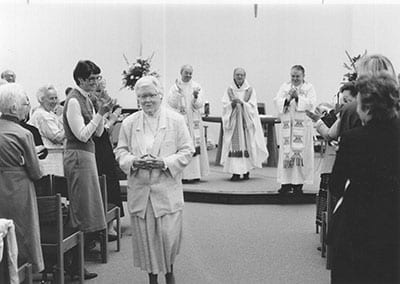 In 1953 Sister Byles moved to Puerto Rico to become academic dean at College of the Sacred Heart in Santurce. Her duties included fundraising and staff development, as the school grew from 90 to 800 students.

In 1972 she was appointed professor of humanities at Maryville University (then Maryville College), later becoming professor of religious studies. She would remain at Maryville for 18 years. Following her retirement in 1988, she continued to teach part-time at Maryville until 1990, and to lead religious education classes for adults in area parishes until 1997. She then moved to the Society of Jesus retirement center in Albany, New York.

While at Maryville, Sister Byles participated in interfaith dialogues and helped plan a Christian-Jewish workshop in the city. For eleven years she also coordinated a spring lecture series, in conjunction with a class called “Futures and Values in a Global Society.” She invited leaders of many religious faiths to speak as part of the series, which some referred to as the Sister Byles Lecture Series. The lectures were open to the St. Louis community and grew in popularity. Following her retirement, efforts were made to secure an endowment gift that would ensure the future of the series, which would be named officially in honor of Sister Byles. The main endowment gift was made by Howard and Stephanie Stanley in 1997. 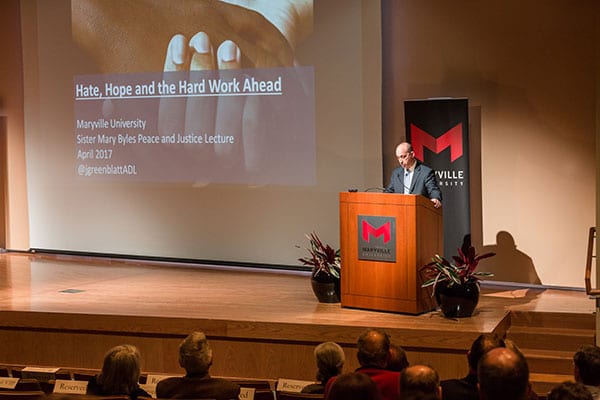 In 2016 the Series was revitalized and renamed the Sister Mary Byles Peace and Justice Prize and Lecture, which now includes an annual award and monetary prize for individuals whose lives and work focus on issues of peace and justice, and—more broadly—diversity and inclusion. The honoree is invited to give a lecture on the Maryville campus, and to receive their award. The inaugural recipient of the Sister Mary Byles Peace and Justice Prize was legendary St. Louis civil rights pioneer, the honorable Frankie Muse Freeman. In 2017 the prize was awarded to Jonathan Greenblatt, CEO and National Director of the Anti-Defamation League.

The Benefactors: Howard and Stephanie Stanley

The Stanleys were great admirers of Sister Byles, and regularly attended lectures and events at which Sister Byles spoke. Until her death in 2005, Stephanie Stanley served on the board of the Interfaith Partnership of Greater St. Louis, personally bringing people of different faiths together in dialogue. She hoped such dialogue might bring about greater understanding and peace among people of different backgrounds.