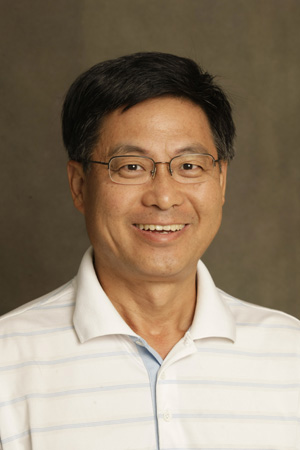 Guangwei Fan, PhD, is director of the actuarial science, data science and mathematics programs. On the wall above his modest Kernaghan Hall office desk hangs a sheet of paper with just two words in the frame: HAPPY TEAM.

“The first questions I asked when I became director of the program were, ‘Is this a happy team? Are the students happy? Are the faculty happy?’” Fan says. “Because if the students and faculty are happy, then the employers who hire our students are happy.”

The mantra must be working. Under Fan’s direction, Maryville’s programs have gained a reputation for excellence. The actuarial science program is ranked in the top 20 nationally by College Values Online, and 100 percent of graduates land a job in the field—some students are hired before completing their studies. Full-time positions often evolve from lucrative internships and co-op programs.

“We have had students get full-time jobs at Centene, Edwards Jones and MetLife after only one semester in the master’s in data science program,” Fan says. “And a student from India was offered a six-month co-op position at Bayer/Monsanto after taking a class, Experimental Design, with Xiaobo Li, PhD, an adjunct instructor who works at Bayer/Monsanto.”

The increasingly lucrative fields of actuarial and data sciences focus on predicting future events based on Big Data. Students come to Maryville from around the world to earn undergraduate and graduate degrees in these programs.

The program’s alumni report career success and give high marks to their academic training.

Tim Rozar, ’97, is chief of staff at Reinsurance Group of America, Inc. (RGA).

An education innovator, Fan has grown the data science program from a handful of students to about 20 undergraduate and 40 graduate students. Fan also wrote the university’s first e-textbook and since then has written four more.

In the classroom, Fan leads by recruiting alumni and other business professionals from companies like RGA, Bayer/Monsanto, MasterCard and Pfizer to teach at Maryville. Successful alumni, like Dennis Murashko, ’02, also give guest presentations. Murashko is co-founder of the Education Insurance Corporation (EIC), and serves as chief operating officer, general counsel and corporate secretary.

“I spoke to Dr. Fan’s classes about my current interdisciplinary role at EIC,” Murashko says. “From the students’ insightful questions, I could tell that Dr. Fan continues to teach them to supplement math with a heavy dose of other material. He was, for example, one of the first to recommend that I spend a part of my last college year overseas at the University of Oxford learning something other than math. I succeeded, in part, by focusing half of my time at Oxford on econometrics and the other half on the Glorious Revolution of 1688. In all, my interdisciplinary education has opened up exceptional career opportunities.”

“Our students already know mathematics,” Fan says. “It’s more important to me that they learn how to communicate what they know. They have to make it easy for someone without a math background to understand it. I want them not just to have a job, but to grow as a person.”