On a near-perfect weather day, a group of Maryville students walks along a path lined with dozens of flowering cherry trees. The group stops at intervals to take pictures of the fragrant blossoms using their iPads. Later, they will take pictures of hundreds of daffodils, crocus and other bulbs that are emerging through the ground, thanks to the idyllic spring conditions.

The beautiful display didn’t require a trip to Washington D.C. — just a visit to the Japanese Garden at the Missouri Botanical Garden, one of St. Louis’ hidden treasures. The Maryville students enjoyed their afternoon tour thanks to a photography exploration class taught by Scott Angus, MFA, director of the photography and digital art programs and associate professor of design and visual art. 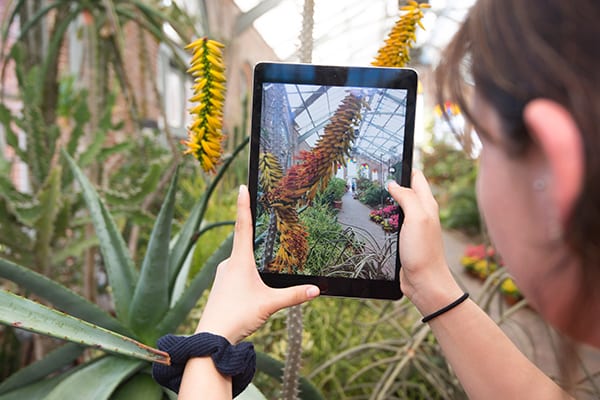 “Each week, we went out with our iPads and learned how to explore our world,” Angus said. “Most students, even those students who grew up in the St. Louis area, haven’t seen half of what our city has to offer. They might have visited the Gateway Arch or been to a Cardinals game at Busch Stadium, but that’s about it.”

Angus began the course with a visit to the industrial riverfront, the area immediately south of the Gateway Arch. Amidst the abandoned warehouses and graffiti-decorated levee walls, students had the opportunity to learn about the relationship between the Mississippi River and industry, the backbone upon which the region was built.

“The class was a good opportunity for students, especially international students like me, to see the city,” said Vittorio Sasso, who came to Maryville from Venice, Italy. “I really enjoyed discovering new places that I didn’t know existed and learning more about things like history and architecture. My perspective of St. Louis has changed.”

Sasso said he especially enjoyed a hike in West Tyson County Park where the class saw waterfalls, steep bluffs and a portion of the Meramec River. The hike was during the dead of winter, with much of the foliage a muted gray color. “It made me rethink where you can take photos, and that any kind of environment provides a blank canvas,” he said. 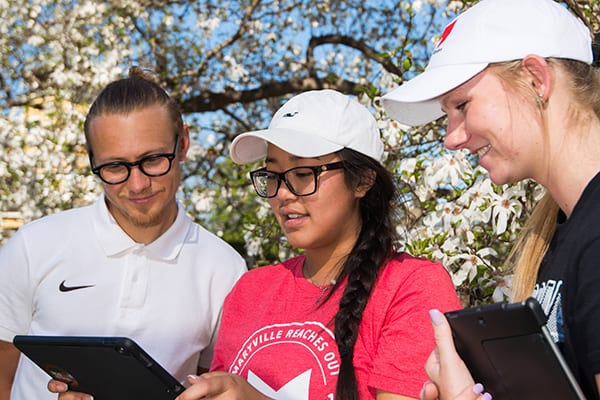 Though found in the Maryville course catalog under photography, the class also touched on larger topics from economic revitalization to diversity and human rights. One of its most important stops was to Fountain Park, a neighborhood located in North St. Louis City. To reach it, students traveled north of the Delmar Divide, a socioeconomic and racial dividing line. The neighborhood to the south is 70 percent white and the neighborhood to the north is 98 percent black, with distinct cultural and public policy differences.

“It’s one thing to talk about the Delmar Divide, but it’s another thing to take students to the Delmar Divide and cross it,” Angus said. “The class educated students about what a wonderful city St. Louis is, but it was also meant to open their minds and challenge them to new ways of thinking. My hope is to create engaged citizens of this city, and the world.”

The Fountain Park neighborhood is anchored by an oval-shaped park, with old-growth trees and stately 19th-century homes circling the perimeter. The large fountain, for which the park is named, stands in the center. But the park is also known for a bronze statue of Dr. Martin Luther King Jr. that was installed in 1978. In recent years, the statue has become a symbol for hopeful change for a struggling neighborhood. Angus ensured his students spent a few minutes paying their respects at the foot of the statue. 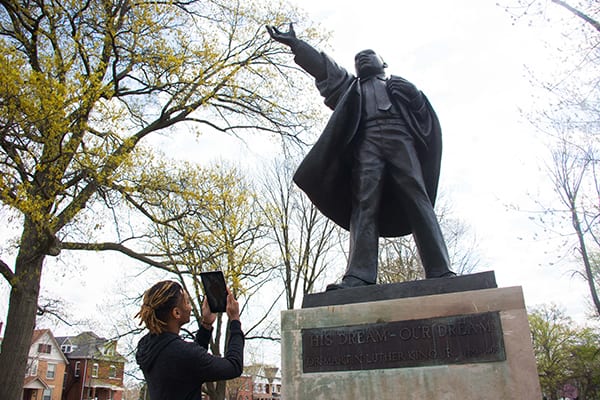 Their next stop was to the northeast corner of the park, where a magnificent brick building curved along the street. Cylindrical turrets adorned the facade, and large picture windows overlooked the park. Built in 1897, the building originally housed store fronts at ground level and apartments above. Today, it is boarded up and covered in graffiti. Smashed bricks and trash spew from holes in the walls, evidence of decades of unhoused residents seeking shelter.

Angus discussed the architecture of the building, while students took pictures of the building’s details. Across the street laid another abandoned building. Its dilapidation didn’t stop vibrant red tulips from growing up amidst the unkept garden. The juxtaposition captured the eye of several students, and they ventured bravely into unchartered territory to grab the shot. 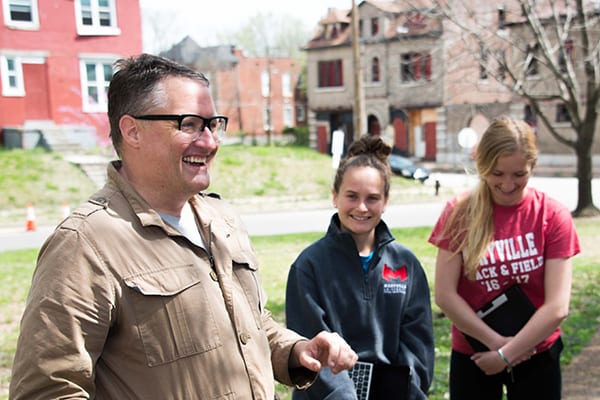 At the end of the semester, the students curated their images into final portfolios, which were then critiqued by their fellow classmates as well as Angus. Images were judged based on basic photography concepts like composition, light and color, which Angus taught throughout the semester. Angus also taught students how to use various apps, like Hipstamatic, to capture and edit the images on their iPads.

“My favorite part of the class was seeing my photos progress,” said Michaela Jackson. “I am a biology major, and I decided to take this class to give myself a mental break from science courses. I love photography, so it was great to learn how to improve my photography skills while learning about the world around me. I’ve learned so much about the city, even after having lived here my entire life.”