4/ Over 30 players took part in today’s performance assessment. Thanks to @VictorKizer, the @StLouisBlues and their amazing training staff for visiting campus today! #LGB pic.twitter.com/Sn19PLsTen

“We have high-end equipment and we use the same force plates that the Blues’ strength staff uses, and we are currently the only ones in the region that have WattBikes, which are used at the NHL Combine,” says Victor Kizer.

Kizer, the director of Maryville’s exercise science program and assistant professor, was asked to helped facilitate the partnership with the Blues because of a professional relationship he has developed over the past two years with the team. Student John Anderson assisted during the day of assessments.

The Blues arrived early Tuesday morning and performed bike sprints and jump and push up tests while Kizer and the Blues strength coaches closely monitored the players.

3/ The bike sprints measured power output and were conducted on our two @wattbike units, the only such bikes currently in the region pic.twitter.com/9c4rmQpRaA

5/ And a few more pics, just because #LGB! pic.twitter.com/G3IFjBeWm4

The Blues finished the day and week with on-ice training at the team’s practice facility. 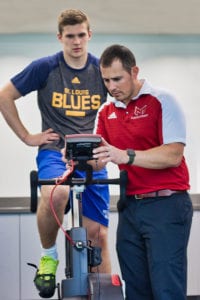 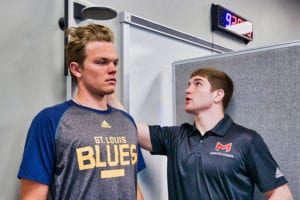 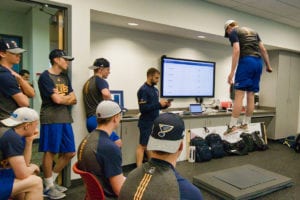