As a child of the 1980s, before the worldwide web or mobile devices were mainstream, Matt Raithel played his share of video games. He never imagined he could earn a living in game design.

Today, however, Raithel is owner of St. Louis-based Graphite Lab, which creates video games for top brands like Hasbro. His name is in the credits for more than 50 games.

Raithel shares his talent and expertise with Maryville students as a game design and motion graphics instructor.

“What gets me excited is helping this generation go from thinking game design is something they may never be able to do, to learning how to do it, and even having ideas of how to do it better,” Raithel says. “Watching that discovery happen in my classroom is a thrill.”

“For Maryville to recognize that and start crafting a future generation of game designers is great for the students and for the St. Louis region.” 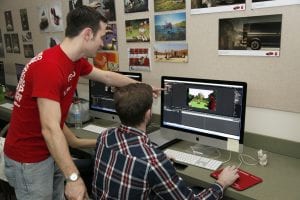 In conjunction with the BFA program in interactive design, Maryville will launch a concentration in game design this fall. Offering game design curricula is progressive, Raithel says, noting that recent statistics show the gaming industry is worth nearly $100 billion globally, and is expected to grow.

“For Maryville to recognize that and start crafting a future generation of game designers is great for the students and for the St. Louis region,” he says.

Raithel’s classroom is set up like a production studio. Students are considered team members, and have a level of autonomy and responsibility similar to his Graphite employees.

“He brings his expertise from running a business into the classroom,” says senior Mandy Weber. “He gives everything a real-world perspective and explains how the things we’re learning can later be applied.”

Raithel also uses his professional network to introduce students to working professionals who share insight about real-world projects. Although he calls upon creatives from both coasts, Raithel also introduces students to developers in the St. Louis area, where video game design is rapidly expanding.

This story was originally published in the Spring 2016 edition of Maryville Magazine.