A first-generation college graduate who has faced the hard choices adults often make in trying to balance the pressing needs of family and career, Dan Viele, dean of the School of Adult and Online Education, brings a vision of online learning to Maryville that serves as a model for universities across the country.

“We’re creating programs for working adults who have taken the bold step of completing their degrees,” Viele says. “They lead busy lives, and they’re looking for a quality program. We have respect for their maturity and ability to process content differently than the traditional 18- to 22-year-old college student.” Launching five years ago with select courses in advanced nursing, Maryville Online now offers 30 programs across academic disciplines, with 10 more in development for next fall.

“Dan Viele is at the core of our online program success,” says President Mark Lombardi, PhD. “He has designed and implemented the highest quality, cutting-edge model for online education in America with quiet professionalism and a commitment to excellence.” 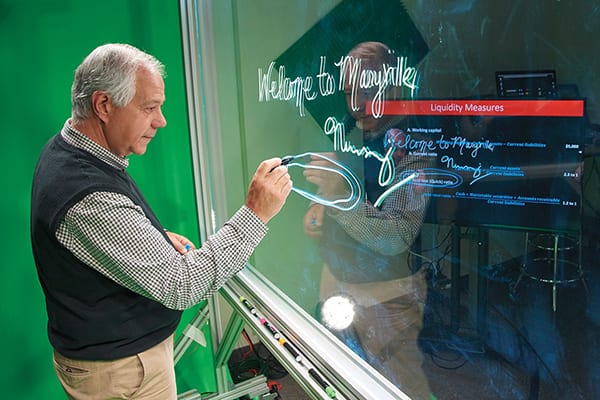 Viele grew up in Springfield, Il., the son of a coal miner and his wife, both of whom immigrated as children to the U.S. from Italy. Neither of his parents had the opportunity to experience education beyond grade school. “We were a working-class family; those were my roots,” Viele says. “I inherited my dad’s work ethic, and I was determined to figure out a way to get a college education.”

Viele earned a bachelor’s in accounting and later returned to school for a master’s, earning a slot as a graduate assistant to help finance his studies—his first introduction to working in higher education. In a sense, his early efforts to create additional learning opportunities for his students was similar to what his team does now for Maryville’s online programs, Viele says. “I presented the content in ways that were shaped around the major questions students asked,” Viele says. “I felt like I was really helping students.”

Viele’s teaching career extended over 20 more years as an accounting professor, and along the way he made a point of studying best practices in student engagement. He also stayed alert to changing workforce needs. When the fields of management information systems and information technology emerged in the 1980s, he developed courses for both subjects at a time when few others understood computers and technology. Viele later left academia to become a controller and systems analyst for a start-up company in St. Louis, where he pushed the boundaries and learned to expect more from tried-and-true systems.

“I did a lot of things with their accounting system it wasn’t really designed to do, such as extract data and build graphic views of how well we were performing, creating a precursor to the dashboards and analytics we use now,” Viele says. “I was bringing technology to the forefront and using accounting to convey information in a way that was most valuable to the people who needed it—but who didn’t know how to get it or use it.”

With that experience, an axiom for the online program was first realized. “That’s what we do here at Maryville,” he says. “We constantly focus on finding the right data to inform our decisions about which programs will be successful and meet market demands as well as how best to engage our students.” 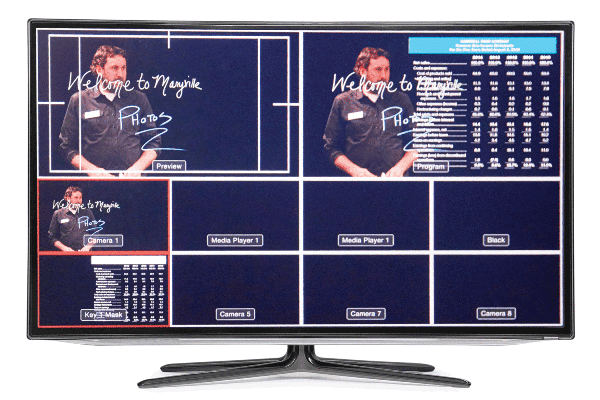 Viele’s ingenuity landed him a job with the Silicon Valley company that developed the accounting system. But he missed teaching, and returned to higher education. Viele joined the faculty at Webster University just as a decision was made to create an online MBA program. He eagerly jumped aboard the planning team. “Along the way, we figured out a lot of best practices,” he says.

In 2013, when Viele joined Maryville, the Catherine McAuley School of Nursing in the Walker College of Health Professions had just launched several graduate courses, but that was the extent of the University’s foray into online education. His charge was to expand the online format to other academic disciplines. In preparing for that expansion, Viele hired two key teams: learning designers and rich media and system architects—experts in creating a flexible, online environment. For them, excellence is not just an idea—it’s a measurable goal. “We have a course review process that is 25 pages long,” Viele says.

Viele’s impact on the online initiative at Maryville is game-changing, says Katherine Louthan, executive director for the School of Adult and Online Education. “Dan brings a successful strategy for growth through market-relevant program selection, data-driven decision making and an engaging learning environment,” she says.

As a pioneer in online learning, Viele shares his knowledge throughout the country with advisory boards and as a speaker and panelist. “Dan is a systems thinker who knows the value of infrastructure,” Louthan says. “His unique take on how we partner with academic departments and faculty to bring online learning to life is special. He is known to say, ‘We don’t own programs or curriculum, we only own the quality of the work we do and the service we provide.'”