Allie Patton, ’16, graduated with her MA in Organizational Leadership and Development on May 7. A few weeks later, she received a promotion at her job with local public relations giant Fleishman-Hillard.

“I’m sure my new graduate degree helped with that,” Patton says.

It all began when Patton landed an internship at FleishmanHillard in 2014. A year later, she became a junior business partner working as a specialist in talent development, and began working on her master’s. Now she’s a senior specialist.

Patton helps employees figure out ways to become happier and more productive at work. For example, she recently brainstormed with an employee about her perception of herself as an important part of the company.

“We spent a long time rerouting her thinking and looking at things from a more positive perspective,” Patton says. “She realized that she did add value, which had not been something that was obvious to her before.”

“I wanted everyone to realize that changing your mind and trying different paths is completely healthy and acceptable.  I also wanted people to see that there is success in the end – I love my job.”

Patton also helps people take a step back before leaping to conclusions, with the aid of a ladder concept she learned in her Maryville program. “I’ll draw a ladder and say, ‘Make sure you’re not jumping up to the tenth rung before you know all your facts,’” she says.

Patton gets a tremendous amount of satisfaction from her work. “It’s so exciting that I get to help people every single day,” she says.

The Power of Change and Personal Choice

On her own career ladder, Patton has several thoughts: keep climbing at FleishmanHillard now, and later, perhaps work for, or start, a nonprofit organization. She’d like to help disadvantaged people work their way into careers, an issue she became aware of during an internship with Crisis Nursery, which supports families undergoing severe stress.

No matter what she chooses, Patton believes it won’t be a mistake. She looks at the many different decisions she made that eventually brought her to FleishmanHillard: changing colleges three times, switching majors from social work to organizational leadership, and taking another job that wasn’t the best fit. 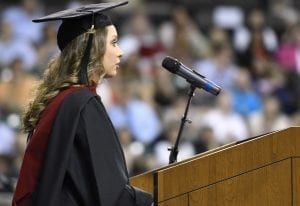 “I don’t think there’s ever a wrong choice,” Patton said. “It’s about how you learn from the choice not working out, and how you change after that choice.”

In fact, as one of two Maryville University commencement speakers (see Elizabeth Hammond, ’16), Patton chose to talk about what she calls “the power of change and choices.”

“I wanted everyone to realize that changing your mind and trying different paths is completely healthy and acceptable.  I also wanted people to see that there is success in the end – I love my job,” she says.

“We live in a world where the only constant is change. That is exactly what I have been doing ever since I graduated high school in 2009. I changed cities, I changed colleges (three times to be exact), I changed majors (again, three times), I changed jobs and I changed dreams. All the while I was constantly asking myself, “What am I supposed to be doing and what do I want to be when I grow up?”

Maryville embraced my love for change, and choices, and gave me the soft landing pad after years of searching for the perfect school – and now, it has provided me with the launching pad into a fulfilling career.  So I am here to say, ‘Who cares if you don’t have it all figured out, because most of us don’t.’  I may choose to change my career in five years, and that’s okay. In fact, I recently had the privilege of speaking at my high school’s career day and some of my former teachers were shocked to see me in the role I am in today. In high school I was the one who had no idea what they wanted to do or be. I knew that I loved working with people and helping them – oh, but wait, I also loved science! Oh, and art class was fun, too. How was I supposed to choose one path for the rest of my life? The high schoolers I met two weeks ago at career day shared the same thoughts, and I told them exactly what I am telling you, change and choices – embrace them!”