After 52 years of franchise history, the St. Louis Blues captured the Stanley Cup in a 4-1 victory over the Boston Bruins in Game 7. No team before the Blues has gone from last place in the N.H.L. to winning the Cup in the same season. St. Louis has erupted in celebration, and the Maryville alumni and students who work for the Blues have a front-row seat to this historic moment. 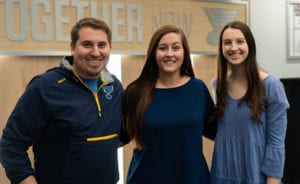 “I was in the Enterprise Center for the watch party, and when we got that first goal I was in an alumni suite. Experiencing that first goal with a former player of the Blues was so cool, and seeing everybody’s reaction was amazing, during the game and after the game,” said Olivia Reese, a senior in the Rawlings Sport Business Management Program, who is currently interning with the St. Louis Blues corporate sponsorship department.

Reese has spent the past season ensuring all contract terms between the Blues and its corporate sponsorship partners are fulfilled. This includes documenting sponsorship opportunities and creating recap presentations. She also completes market research for potential clients. 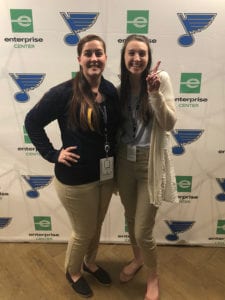 Reese works closely with Shelby Sheehy, who is also a senior in the Rawlings Sport Business Management Program and interning with the Blues corporate sponsorship department. The two were together the night of Game 7.

“The atmosphere and the energy was insane,” Sheehy said. As a lifelong Blues fan, she said she will never forget celebrating the Stanley Cup win alongside thousands of other fans. “I was so emotional, and I was crying,” she said.

Kevin Bauer, ’16, was also at the Enterprise Center that night. Bauer serves as operations coordinator and will soon move into the role of manager of event services. He oversees a team responsible for ensuring the building and staff are prepared for events.

“I watched the last 10 minutes from the floor, and when the game hit triple zero we all started hugging and ran onto the ice,” Bauer said. “I even did a penguin slide, it was a lot of fun!” he explains of diving head first across the ice. 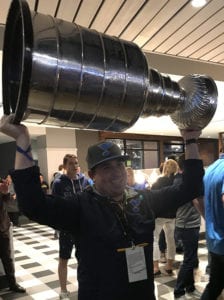 Later that night, when the Blues players arrived back in St. Louis, Bauer had the opportunity to hold the Stanley Cup and perform the signature move of raising it above his head.

Alex Aivaliotis, a senior in the Rawlings Sport Business Management Program and intern with the St. Louis Blues hockey operations team, said he started jumping up and down as the clock ran out. “Winning is surreal, especially knowing where we can from earlier this season,” said Aivaliotis, who helped with team analysis and recruiting. “I’m so happy for the players and everyone I work with in the front office. To see our hard work pay off is incredible.”

Recent graduate Josh Eisenhoffer, ’19, said he’s also grateful to have been part of the championship season. Eisenhoffer recently completed an internship with the St. Louis Blues community relations team, which manages the Blues’ charitable initiatives like the Blues for Kids Foundation. “It’s an awesome feeling to be able to say I had a little part of making history,” he said. 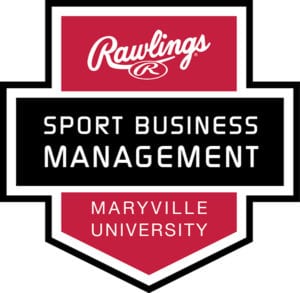 The parade to honor the champion St. Louis Blues is set for Saturday, June 15 at noon. The parade will start at 18th and Market Street. A rally will follow at the Gateway Arch.

Maryville University congratulates its corporate partner the St. Louis Blues. The University is proud to sponsor organizations and events that enlighten, enrich and entertain the members of the St. Louis community. Let’s Go Blues!