As senior Brittany Pomilee reflects on her final year at Maryville University, she says her involvement with diversity and inclusion on campus “has shaped me into the young woman I am today.”

Pomilee is president of the Association of Black Collegians. Because of her role, she is also a member of Leaders for Equity, Advancement and Diversity (L.E.A.D.), a council made up of 32 students who have an executive role in a cultural or social awareness student group on campus.

Participants directly communicate with school administrators, faculty and staff as they promote multicultural awareness and a welcoming campus environment. Through their work, students continue to gain important career skills, and participation on the council also gives them a sense of ownership over the work of diversity and inclusion on campus, says Tiffany Reed, program coordinator for the Office of Diversity and Inclusion and the group’s advisor.

“The social and cultural awareness groups they lead allow students of diverse identities to amplify their voices and build cultural learning experiences for the community,” Reed says. “Our student leaders are creating spaces for the majority of students on campus to learn about cultures and identities different from their own.”

Student leaders benefit from a wider network because of their involvement, says Turan Mullins, assistant dean for diversity and inclusion.

“Being engaged through the cultural groups gives student leaders the opportunity to connect and build community with people who share similar backgrounds and traditions, allowing them to feel a sense of belonging,” he says.

Soad Salem, sophomore and vice president of the Middle Eastern Student Association, helped found her organization last year because she felt an absence of representation for Middle Eastern students on campus. 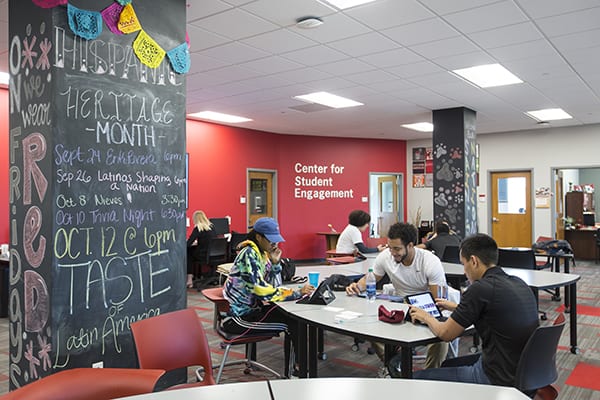 “We want people to be able to distinguish between religion and culture when it comes to the Middle East. Many people have misconceptions or are unaware of different cultures,” Salem says. “The only way we can grow as individuals is by educating ourselves. The more we learn about each other, the more we can feel united.”

The success of student organizations represented by L.E.A.D. is largely due to the hard work and creativity of the student leaders, but also the support of Maryville’s administration, says Reed. She points to the important role of “top-down leaders who understand and appreciate the value of diversity and inclusion and hearing ideas and concerns straight from the students.”

Last year, Mark Lombardi, PhD, president of Maryville, and Nina Caldwell, EdD, vice president for student life, partnered with the student organization Abolishing Barriers Through Leadership and Empowerment as well as the L.E.A.D. Council to improve accessibility on campus. After assessing the needs, students used their findings to inform a proposal for the president. As a result, Maryville now has more accessible restrooms, and hands-free doors have been installed in many locations.

Pomilee says her favorite memory with the L.E.A.D. Council is meeting with Lombardi and Caldwell about new and upcoming campus events that were planned with the assistance of council members.

“The conversation showed each organization’s growth and dedication to the movement of diversity and inclusion,” Pomilee says. Their work is valuable across campus, Reed says. Even so, pushing for progress can be difficult, especially for students who are positioned at the forefront of change on campus.

“They’re pouring so much energy into our campus,” says Reed. “Part of what we try to do is pour love and support back into them.”

Charatthep Khunchan, sophomore and president of the Hawaiian Asian Pacific Islander Association (HAPA), says the relationships he has developed through L.E.A.D. have made a powerful impact on his campus experience. And his circle keeps growing.

“They all come from different backgrounds and cultures and are passionate in different things,” Khunchan says. “I’ve gained so much support, knowledge, confidence and friends through being a part of L.E.A.D. Because of that my college experience has been amazing.”