To commemorate the 100th anniversary of the 1918 influenza pandemic and its ties to World War I, a team of Maryville University faculty and students curated an exhibit in the Morton J. May Foundation Gallery.

Germaine Murray, PhD, professor of English, led the team of researchers. The project involved interdisciplinary collaboration between a small group of English, biology, education and design and visual arts students and faculty.

“I wanted to study the flu because it’s a story that doesn’t get told in the history books,” Murray said. “The disease also has close connections to World War I, which was the most important event of the 20th century and affected the arts in a profound way.”

Four years ago, Murray and John Baltrushunas, MFA, associate professor of art and director of the May Gallery, curated “World War I Remembered,” an exhibit marking the 100th anniversary of the start of the war. That exhibit honored the men and women who served or volunteered during the war.

Christopher O’Connor, PhD, assistant professor of biology, joined Murray and Baltrushunas on this new collection, which explores the war through the lens of the influenza virus. The collaboration between the sciences and humanities highlights Maryville’s active learning ecosystem. 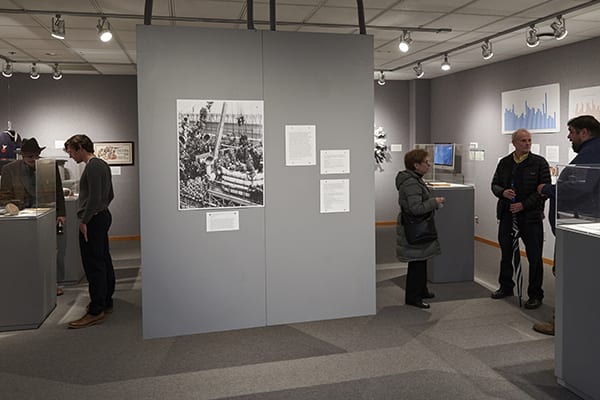 Seniors Caitlin Allen, an English student, Emily Street, a biology major, and Wyatt Thurman, who is studying education, worked alongside their professors to explore the impact of the influenza pandemic and present their findings as part of the exhibit.

“We encourage our students to conduct research because it’s a way for us to bring the things we discuss in class into the real world,” O’Connor says. The team spent more than a year researching, collecting artifacts and writing descriptions for those pieces, and meeting weekly to discuss their findings, he says.

During the process, Allen became fascinated by groups whose contributions to the era are often overlooked. These forgotten voices include 16-year-old Camilla Scanlon, a Maryville College student who died from the virus in October 1918, she says. Allen found the student’s story through the Maryville University Archives.

“I enjoy finding a topic that interests me and taking the time to learn more about the people, events and history behind it,” Allen says.

The exhibit also explores how the disease affected the greater St. Louis area. The city escaped widespread contagion thanks to the efforts of Max C. Starkloff, who was the St. Louis City public health commissioner in 1918. He required the closing of businesses, schools and churches and implemented a variety of awareness campaigns, Thurman says.

“I enjoy the merging of disciplines,” Thurman says. “It is fascinating to research the biology of the disease and how medicine changed, and then look at the sociological side and how the disease affected popular culture.” 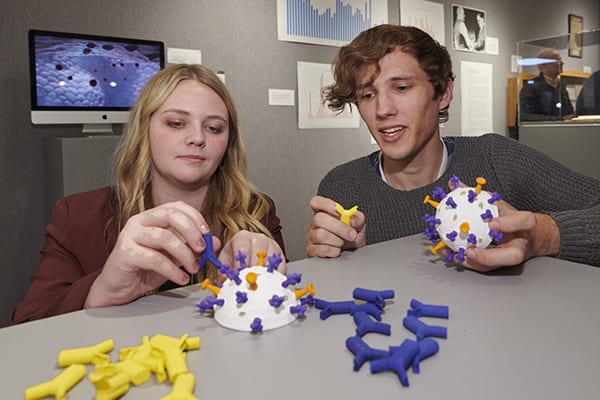 Visitors to the gallery are greeted by a large 3D model of the 1918 influenza virus, printed by the Big Rep One printer from Maryville’s Design & Visual Art Program. Smaller, handheld 3D models of the virus are also on display so visitors can take them apart and put them back together using color-coded keys.

Another part of the exhibit features World War I artifacts including military uniforms and an American flag carried on Armistice Day during a St. Charles, Mo. parade. The artifacts are on loan from Maryville students, faculty and staff and members of the community.

“Physical objects are the conduit to learning, even in today’s virtual world,” Murray says. “That tactile experience is something the individual won’t forget and is so important to learning.”