Candace Chambers-Colbeck, PhD, professor of chemistry, spreads a handful of small plastic gadgets out on her desk. She introduces the gadgets: lightweight, wireless, portable sensors that allow students to literally immerse themselves in their physics classes.

“Our experiments aren’t inside in the traditional lab anymore,” Chambers-Colbeck said. “These sensors allow our students to work outdoors and measure physics in the real world. Students can go anywhere they want and find physics on their own, instead of being confined to a room and working from an old-fashioned packet with 50-plus recipe-style directions.”

During the once-a-week lab period, students pair up and venture outside on their own, using what they have learned in class to design their own physics experiments. They use the various wireless sensors to measure real-world experiences like sound, light, velocity and rotation. After collecting the data they’ve gathered on campus, they report back to the classroom to create reports of their work on their iPads. 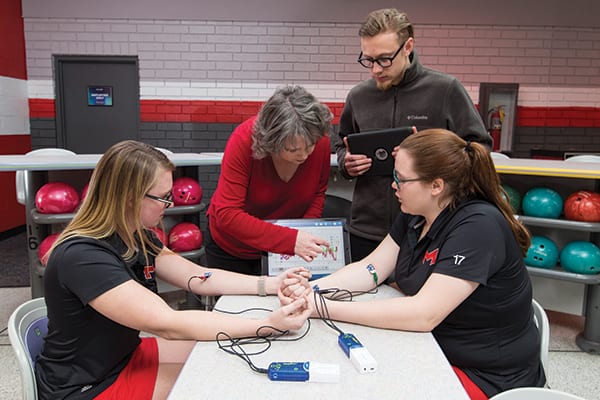 Students use words like “cool” to explain what they’re doing. Professors refer to the process as “inquiry- or project-based learning.” For students, a big part of the cool factor is using their iPads at every phase of the experiments. From interacting with the wireless sensors through Bluetooth, collecting and storing data and taking photos and videos to create an online publication for each experiment, the iPad helps give the whole process high marks.

Abigail Johnson, a pre-med student, and her partner set out one unseasonably warm day in February to test how barriers and temperatures affect the speed of sound. “It was very hands on,” Johnson said. “We set up the sensor, then clapped our hands to measure the speed of sound in the air. We then created an interactive report on our iPads explaining what we did, why we did it and how we did it. It was a different, more engaging way to learn — instead of being told what to do and how to do it.”

A second group of students tested the same concept on another, colder day. They got very different results, providing another teaching moment. The colder the temperature of the air, the slower sound traveled.

The wireless sensors were also used for an experiment at a local bowling alley while the Maryville women’s bowling team practiced. Bowling provides an excellent real-world example of dramatic changes in forces, directions and accelerations. Students used the sensors to capture the speed of the bowling ball as it moved down the lane.

The students also used a wireless electrocardiogram sensor to measure the electrical activity of the bowlers’ hearts. They first measured the bowlers’ resting heart rates, and then measured their increased heart rates after they had bowled for a few minutes. Results immediately displayed on the students’ iPads. Scientific concepts around electricity, like these, are taught in Maryville’s introductory physics classes. 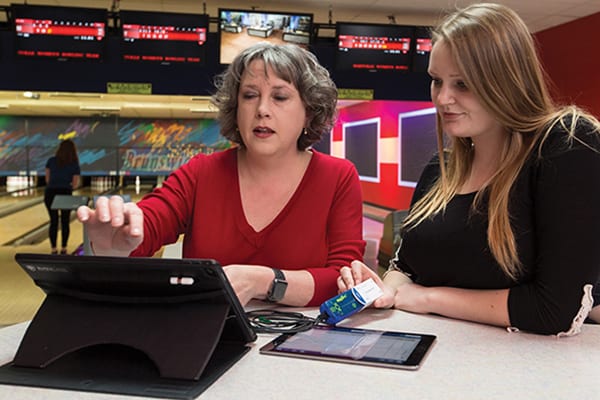 Assistant professor of physics Kelly Lave, PhD, said the new wireless sensors send a message to students that the professors trust them to think for themselves. “Instead of physics being a theoretical thing, students can go outside and record the motion of a car or a person passing by,” Lave said. “They come up with a way to explore the concepts instead of faculty thinking for them. As a result, they get the opportunity to be creative and have ownership over their ideas.”

Lave said requirements for an experiment are usually centered on a specific goal, and guidance is always provided to students, if needed. “Most of the time it’s me simply pointing them in the right direction,” she said. “I tell them to zero in on what we’ve been studying. And I explain what the data will look like when it starts coming in so they know if they’re getting useful stuff from the wireless sensors. Some ask a lot of questions beforehand. Others say, ‘I’ve got this’ and they’re gone.”

Charleigh Koch, a second-year physical therapy major, readily admits to once dreading two semesters of physics. In the beginning, she would call her father, an engineer, if she got stuck on a problem. “Physics was a challenge for me because some of the concepts were difficult to understand,” she said. “Sometimes, I just couldn’t get it from the book.”

But now, she looks forward to her physics classes. “Getting out and using the wireless sensors, and being able to actually see how all the pieces go together, really helped me master the concepts. I don’t have to call my dad anymore.” 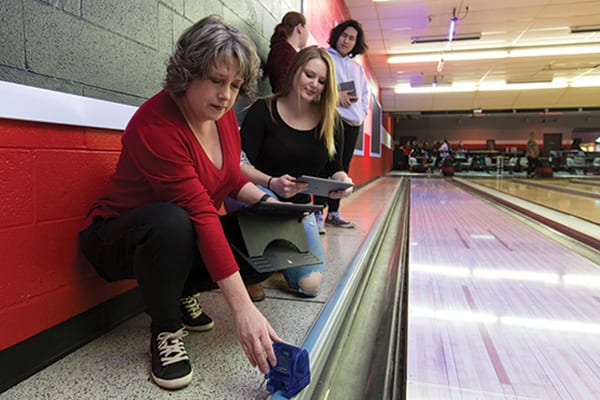 “We’re able to show students the connection between science and their everyday lives,” Yukna said. “And the more we interact with students in that way, the richer the learning experience has been for them and for us, too.”

This story originally appeared in the Spring 2019 issue of Maryville Magazine.