Throughout his prolific career, Albert Pujols has achieved the highest level a professional baseball player can attain. Now, Pujols will accept the highest award for sportsmanship: the Stan Musial Lifetime Achievement Award. Pujols will be honored at the 2022 Musial Awards taking place at Stifel Theatre in St. Louis on Nov. 19.

The Musial Awards presented by Maryville University celebrate the year’s greatest moments of sportsmanship and those in sports who exemplify class and character. The nationally televised show is named for St. Louis Cardinals legend Stan Musial, a beloved baseball icon and civic ambassador, who was the ultimate good sport. Making the honor more special this year is the fact that Pujols and Musial had a special friendship and bond as both earned icon status for an entire generation of fans with grace, humility and brilliance. 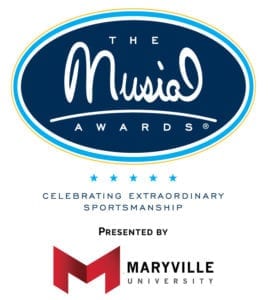 The Musial Family said, “We are overjoyed that Albert will accept the Musial Lifetime Achievement Award as his career has paralleled our father’s in so many ways, and they were such good friends who shared a love of baseball, people, and making someone’s day. Albert has always been so gracious and respectful in everything he does – and to our family. We know dad is looking down on Albert with a huge smile and a rendition of ‘Take Me Out To The Ballgame’ on the harmonica.”

Pujols’ on-field accomplishments speak for themselves – just like Musial’s. But also like Musial, Pujols is remembered as much for his off-field benevolence as his statistical magnificence. Both men valued treating people with kindness and respect. Both were revered as great teammates. Both men played 22 seasons in Major League Baseball, so it is fitting that in 2022, Pujols is honored with an award named for Stan the Man standing for civility, humanity, and using the power of sports and celebrity for good. Establishing the Pujols Family Foundation in 2005, Pujols has consistently sought to help those living with Down Syndrome and improve the lives of the impoverished in his native Dominican Republic.

“I’ve always had the most profound respect for Stan the Man and appreciated the way he carried himself as a player and a person,” said Pujols. “As wonderful as my baseball career has been, I aspire to be remembered for my true passion which is to serve others and give back. To be recognized for being a good person off the field just like Stan was, with an award that bears his name, is one of the highest honors of my career.”

“We are so grateful to Albert for accepting this honor, and it’s so appropriate that his farewell season will be capped by him receiving the Lifetime Achievement Award named for Stan the Man,” said Marc Schreiber, executive producer of the Musial Awards and incoming president of the St. Louis Sports Commission. “We’re also thrilled that our other Musial Award recipients, who have shown extraordinary sportsmanship, will have the chance to share the stage and be recognized alongside Albert. What a wonderful way to affirm their remarkable acts of kindness, class and character. It will be a tremendously special night at Stifel Theatre on Nov. 19.”

MUSIAL AWARDS TICKETS
Tickets for the Musial Awards range from $10 to $35 and are on sale through Ticketmaster. In addition to individual awards show tickets, the Musial Awards offers a special Honoree Circle ticket, which includes a seat in the orchestra level, a pass to the Musial Awards After Party, and reserved parking for $125. All-inclusive packages and sponsorships are also available. More information and a link to purchase tickets is available at MusialAwards.com/tickets.

MORE ON THE MUSIALS
The Musial Awards presented by Maryville University is produced by the St. Louis Sports Commission and the National Sportsmanship Foundation, a charitable nonprofit organization. In addition to keeping Stan the Man’s legacy alive, the mission of the Musial Awards is to encourage kindness, selflessness, integrity and civility in sports and society – and to inspire people across the nation to be good sports. The event has occurred in St. Louis since 2005. Maryville University has served as the presenting sponsor since 2011. The school’s involvement, leadership and generosity have helped make the Musial Awards the most inspiring night in sports.