When Maryville adjunct nursing professor Lewis Griffith was deployed to Afghanistan last year, he had no way of knowing the grave situation he’d face after returning home.

A decade after joining the U.S. Army Reserve, Griffith was called to Afghanistan in April 2019 to work as an ICU nurse. He came back in January 2020 and soon resumed his position as a nurse practitioner at DePaul Hospital.

“We started to hear these rumblings of, ‘There’s this viral disease,’” Griffith said.

By mid-March, DePaul was on its way to having more COVID-19 cases than any other Missouri hospital, something Griffith attributes to health disparities within the area’s low-income population, and a high concentration of skilled nursing facilities. The ICU doubled its staff to handle the demands of the pandemic.

As patients flooded the ICU, two other areas became COVID wings to accommodate “some of the sickest people I’ve ever seen,” according to Griffith.

Griffith and others soaked up any industry information they could find, hoping innovations at other hospitals might work at DePaul. The pressure built as the number of seriously ill patients came close to exceeding the amount of available rooms and ventilators.

“We needed to bring our ‘A’ game to every patient, every minute of our shift,” Griffith said.

At home, to protect his wife and four children, Griffith lived in the basement while also distancing himself from extended family and friends. In mid-April, he moved back upstairs although he still wears a mask around the house and avoids involvement with the family’s meals.

A new normal has set in at the hospital too. DePaul still has two COVID units but a shortage of ventilators is no longer a concern.

To balance hospital work, family life and academic responsibilities, Griffith often employs the multitasking skills he fine-tuned in Afghanistan, where he recorded online lectures and graded papers for his Maryville students during off hours. His time there also offers perspective about the challenges of being a health care provider during the pandemic.

“No one bombed the hospital today. No one shot at us today. It’s not 130 degrees outside like it was in Afghanistan,” Griffith said. “This is OK.” 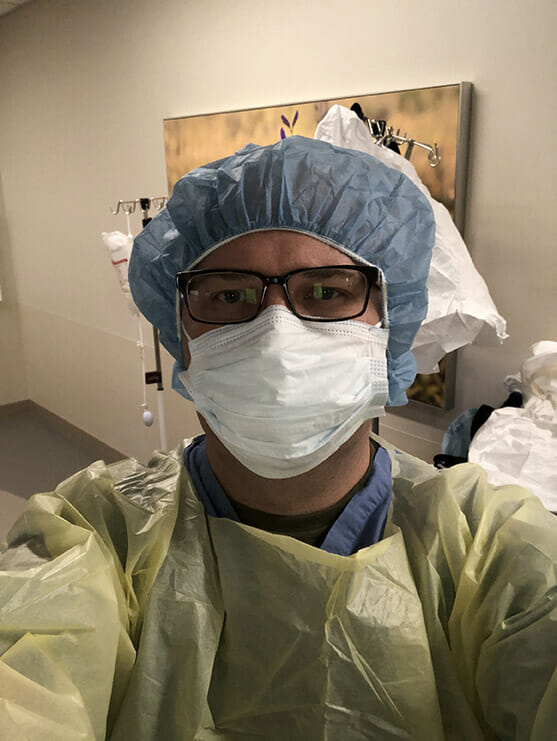