Throughout the pandemic, sports writer Eric Nehm, ’12, yearned for personal contact with his subjects: members of the Milwaukee Bucks NBA team.

But he never dreamed how close he would get to the Bucks’ biggest star, Giannis Antetokounmpo, after the team captured its first national NBA title in 50 years.

“The city held a celebration parade with the players the next day, and I saw Giannis walking away,” Nehm said. “I called out to him, and because we’ve built a relationship, he recognized me and stopped to talk with me. And in that moment, he decided to trust me to such an extent that he grabbed my left hand and put it on his heart so I could feel how hard it was beating.” 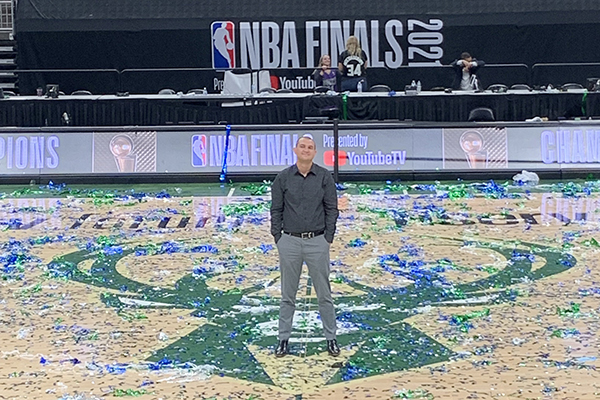 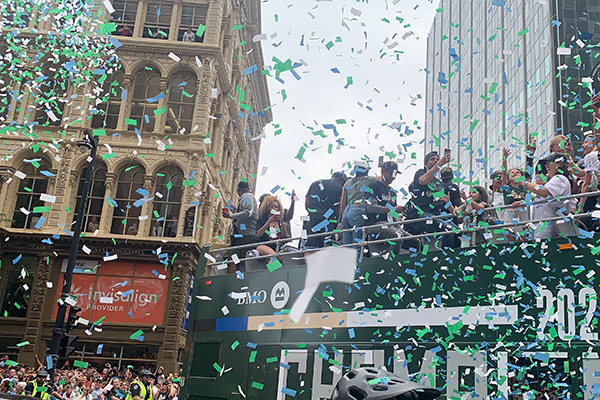 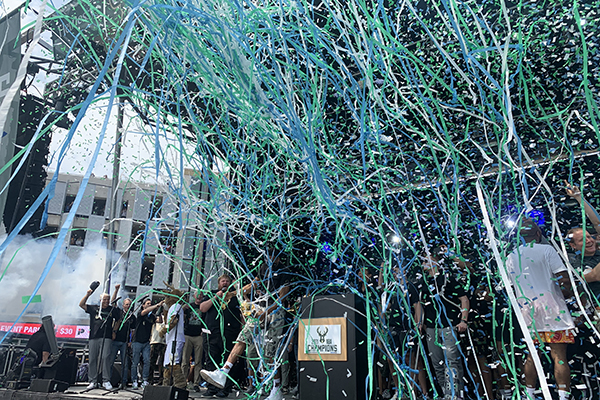 That heartfelt moment with Antetokounmpo, and covering the Bucks’ championship season, is the highlight of Nehm’s career covering the Bucks for subscription sports website The Athletic. But Nehm was ready for his moment, thanks to Maryville University.

“In college, I was thinking my job would be in radio,” Nehm said. “But now I write all the time. Every day, I use the writing fundamentals I learned in Dr. Barb DeSanto’s media writing class and from Dr. Leilani Carver-Madalon. They encouraged me to pitch different ideas, and Dr. DeSanto especially taught me not to overwrite. That’s a critical skill as a writer.”

Maryville also introduced Nehm to podcasting, still a new medium when he was an undergraduate from 2008-12. He helped found the Saints Talk podcast, which sometimes streamed live. After graduating, Nehm put his on-air experience to work by covering the Bucks for Sportsradio 1250 in Milwaukee, his home town.

The next year, he seized a chance to sharpen his writing skills by pursuing a master’s degree in journalism. By then, DeSanto — who had also been his undergraduate advisor — had moved to Kansas State University. Nehm studied with her again while earning his graduate degree managing K-State’s radio station.

Finally, in 2018, The Athletic hired him as its Bucks beat reporter, a full-time writing position. “Because it’s a website, The Athletic doesn’t have the same restrictions that writing for print does,” Nehm said. “It lets me write the way I want, but I still remember Dr. DeSanto’s lessons to get right to the point.”

When the pandemic hit, his Maryville education helped him in another way. “Maryville gave me the writing fundamentals I needed to be versatile,” he said. “That helped me learned how to survive and to tell stories in ways I never would have had thought of before.”

When the Bucks clinched the NBA championship in Game 6 on July 20, Nehm pulled an all-nighter to file the story. The next day, he ran alongside the team in the victory parade — which brings him back to his heart-pounding moment with Antetokounmpo.

It’s a once-in-a-lifetime story, and it belongs to Eric Nehm. He sees the journey that brought him here as a metaphor for his education and career.

“In sports writing, everyone covers the same players and coaches, but each writer does it in their own way,” he explains. “It’s just like in school. People can get the same degree, but you get different things out of it based on what you put into it.

“I didn’t appreciate all of my writing training from Maryville at the time, but it ended up being extremely helpful to me as I used it to create my own interesting stories and find my own ways to tell them.”