“Women” and “leadership” go hand in hand at Maryville. After all, Maryville was founded by women in 1872. 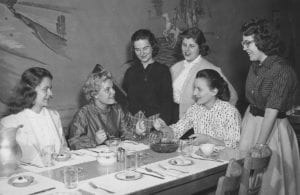 Maryville’s roots trace back to Sister Rose Philippine Duchesne and the Society of the Sacred Heart—a religious order dedicated to education. Philippine Duchesne was a fearless pioneer who led four other sisters to St. Louis from Grenoble, France in 1818—for the purpose of establishing schools for girls.

Soon after arriving they founded the Academy of the Sacred Heart, from which Maryville would later evolve. It was the first school for girls west of the Mississippi.

Originally a college for women, and later a university, Maryville grew and expanded under the leadership of its first six presidents—who were all women.

Maryville became independent, co-educational and non-sectarian more than 40 years ago, but its legacy of leadership by women and for women continues.