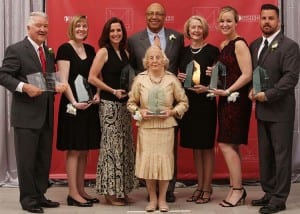 The inaugural Spirit of Maryville Dinner held recently celebrated more than 140 years of generous philanthropy and visionary leadership. The collective energies of numerous groups and programs that help guide and support the University were recognized and annual Alumni Awards were presented to those who exemplify the highest standards of Maryville’s motto, “Excellence in all Things.”

School of Education
Michael Dragoni, ’09, ’13
Dragoni has a long academic association with Maryville University. He earned his bachelor’s in art education followed by a master’s in educational leadership, and he is nearly finished with a certificate in gifted education. He’ll begin his doctoral program in teacher leadership in Spring 2015. Dragoni will teach in Maryville’s Summer Science and Robotics program. As the art teacher at Buder Elementary in the Ritenour School District, he is a recipient of the district’s First Class Teacher Award and recently received a $67,992 grant from the St. Louis-based Innovative Technology Education Fund to introduce technology into his classroom.

College of Arts and Sciences
Stacey Corbet Morse, ‘89
Morse earned her BFA in studio art after first considering a career in business—two fields she has successfully combined since her Maryville days. As co-owner of The Morse Group with her husband, Stuart Morse, ’87, she works to build partnerships between arts organizations and the business community. Morse helped create the vision for Chesterfield Arts in 1996, which is one of the major supporters and resources for artists, public art and education in West County. She has served as executive director of the organization since 2002. Morse is a College of Arts and Sciences National Leadership Council member and works with students to engage in academic internships at Chesterfield Arts.

College of Health Professions
Crystal E. Weaver, ’04, ’10
Weaver earned her BA in music therapy and her master’s in rehabilitation counseling. She is the senior music therapist at SLU Cancer Center and is also responsible for fostering community partnerships with the St. Louis Symphony and the Saint Louis University School of Fine and Performing Arts. Such partnerships allow professional and amateur musicians to perform for patients while they receive chemotherapy treatments in the Infusion Center. Weaver is also responsible for supervising music therapy staff, student volunteers and music therapy internship students from Maryville University. In addition, she is an adjunct faculty member at Maryville University in both the music therapy and rehabilitation counseling programs.

John E. Simon School of Business
Mary Pfanstiel Heger, ’86
Heger is chief information officer and vice president of information technology and the Ameren Service Center for Ameren Services, a subsidiary of Ameren Corporation. She earned her BS in management at Maryville and also holds an MBA. She is a member of the board of the International Institute and a former board member of Craft Alliance and SouthSide Early Childhood Center. Heger is a graduate of Leadership St. Louis ® and has been cited as one of the most influential businesswomen in St. Louis by the St. Louis Business Journal. Other awards include a YWCA 2010 “Leader of Distinction” award and Diversity Journal’s “Women Worth Watching” recognition in 2011.

The Centennial Award
The Centennial Award, which recognizes a lifestyle best exemplifying the values of the Sacred Heart tradition, was presented to Janet A. McMahon, ’62. She serves as director of a charity foundation begun by her father in the turbulence of the 1960s to provide food and clothing for the needy and recently retired as bookkeeper with her family’s hotel business. McMahon, who earned her BA in sociology with minors in history and philosophy, has been close with many of her classmates for more than 50 years, saying: “I admire them for their devotion to whatever profession they chose—many chose education—because they persevered in their careers despite the sacrifices they needed to make and even though their devotion to family came first.”

Volunteer of the Year Award
The Volunteer of the Year Award was presented to Lonnie Folks, ’82, ’98, director of athletics for Richard Stockton College. Folks earned his BS and MBA from the John E. Simon School of Business. He has served Maryville and the Saints athletic community with distinction for two decades. Folks is a former standout student-athlete and Maryville women’s soccer and softball coach, and an award in his name honors members of the Maryville athletic community who exemplify good spirit, stewardship and service. In 2009, he was inducted into the Maryville University Athletics Hall of Fame. Folks is a member of the Duchesne Society National Leadership Council and the Hall of Fame Committee.

Young Alumni Award
The Young Alumni Award was presented to Jenny Bristow Dibble, ’06, vice president of digital engagement at Coolfire Studios in St. Louis. As a full-time student, she earned her BS in e-marketing while also working full-time. Dibble was was named Maryville’s e-marketing Student of the Year in 2006. A 2013 St. Louis Business Journal “30 Under 30” recipient, Dibble built a full-service online marketing agency on the West Coast and then sold it. Later recruited as a marketing manager by Amazon, she worked on strategy and consumer sales before returning to St. Louis and joining Coolfire to launch their digital engagement division.

John E. Simon Award
The John E. Simon Award, named in honor of the late St. Louis businessman, philanthropist and Maryville University trustee, recognizes significant engagement and service. The award was presented posthumously to Julianne Johnson Stein, ’68. Stein earned her BA in English plus her education certificate at Maryville University and her master’s of religious education from Loyola University—New Orleans. As an alumna, she served Maryville in many ways. Stein was past chair of the Duchesne Society National Leadership Council, past president of the Alumni Association, past chair of the National Leadership Councils and Volunteer of the Year in 2008.