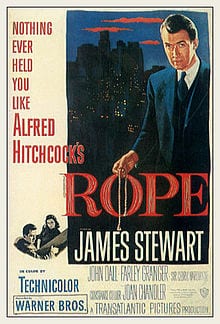 Maryville Talks Movies brings together students and the St. Louis community to watch and discuss significant films in a variety of genres. This week’s film will be Rope, which was released in 1948. Dr. Jess Bowers will introduce the movie and then, after the viewing, lead a presentation and/or Q&A session.

Based on the play Rope by Patrick Hamilton, which was inspired by the 1924 murder of a fourteen-year-old by two University of Chicago students who wanted to prove they could commit a murder and get away with it, Alfred Hitchcock’s taut psychological thriller takes place in real-time over the course of an 80-minute dinner party—with a murder victim’s body hidden under the buffet table. Starring James Stewart, John Dall, and Farley Granger.