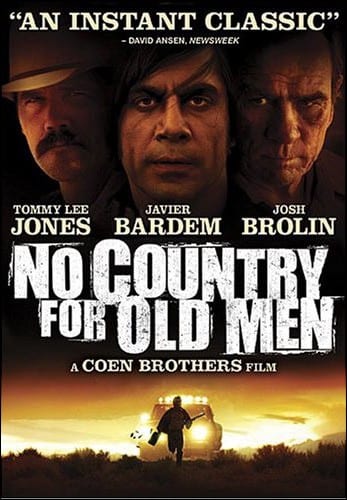 Maryville Talks Movies brings together students and the St. Louis community to watch and discuss significant films in a variety of genres. This week’s film will be No Country for Old Men, which was released in 2007. Professor Jesse Kavadlo will introduce the movie and then, after the viewing, lead a presentation and/or Q&A session.

No Country for Old Men (2007), based on the novel by Cormac McCarthy, directed by Joel and Ethan Coen, is an unsettling and complex film. While it was nominated for eight Academy Awards and won four, in many ways its plot, characterization, genre, and meaning remain ambiguous and subject to debate and discussion. What are viewers to make of the characters: in some ways, familiar (a sheriff and a killer), while in other ways unlike similar representations of these types? What of the storyline, similarly familiar—a drug deal gone wrong—but that becomes less and less conventional as the movie goes on? What kind of movie is it—thriller, Western, crime story?—and why does that matter? And, most importantly, is the film didactic? And if it is, what is its lesson, and, again, why does it matter?