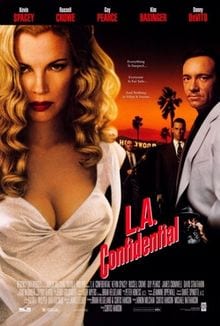 Maryville Talks Movies brings together students and the St. Louis community to watch and discuss significant films in a variety of genres. This week’s film will be L.A. Confidential, which was released in 1997. Proessor Germaine Fry Murray will introduce the movie and then, after the viewing, lead a presentation and/or Q&A session.

An example of neo-noir, L.A. Confidential is considered the best film Curtis Hanson ever directed. The film explores issues of political and police corruption, racial prejudice, and Hollywood decadence in 1950s Los Angeles. The story is from a novel by James Ellroy and follows the lives of three very different policeman, often at odds with one another, who are investigating a triple murder at an all-night diner from very differing perspectives. The film is best known for the outstanding script, which won an Oscar, and the more than 80 speaking parts.