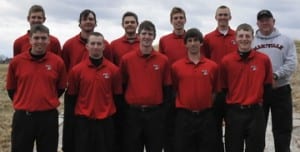 A total of 113 teams from all divisions submitted GPAs of 3.0 or higher to earn All-Academic team recognition.

“We are honored to be recognized by the GCAA for our efforts in the classroom,” said Glenn Paulus, head coach. “The team always strives for academic excellence and this award is a result of their desire to learn. It is a privilege to be associated with such young men.”

“Congratulations to Coach Paulus and the 2010 men’s golf team for their efforts in the classroom,” said Tony Duckworth, director of athletics. “This is an outstanding honor for the Maryville University men’s golf program.”

About Maryville University
Founded in 1872, Maryville University is a four-year, private university located in west St. Louis County. Ranked by U.S. News & World Report as one of America’s Best Colleges in the Regional Universities – Midwest category, Maryville University students may choose from 50 academic programs, including degrees at the bachelor’s, master’s and doctoral levels. Among recent graduates, 82 percent are employed or attending graduate school. More than 16,000 Maryville alumni work and live in the St. Louis region.