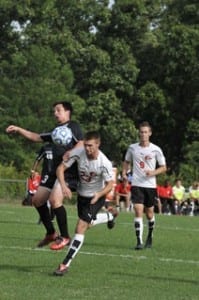 ST. LOUIS, MO — Maryville’s Men’s Soccer program picked up a big victory Friday evening after defeating the visiting Missouri S&T Miners by a score of 2-0. Missouri S&T came into town with a four-game winning streak and were also fresh off a victory over the No. 1-ranked team in Men’s Division II Soccer. The Saints picked up a goal in each half and completed the stunning victory.

Nick Doherty recorded the first goal Friday night for Maryville in the 22nd minute of play. Doherty handled a free ball in the box outside the goalie and knocked home his 2nd goal of the 2011 season. Kory Dowell was awarded with the assist on the play.

Dowell would add the second goal for Maryville in the second half with a blast that snuck inside the post at the 59th minute mark. Michael Flately recorded four saves for the Saints and finished with the impressive shutout.