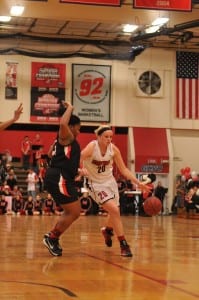 “Maryville University is proud of its student-athletes because their outstanding performance in their sport is matched and exceeded by their commitment to academic excellence,” said President Mark Lombardi, PhD.

Maryville ranked sixth in total number of student-athletes honored in the GLVC conference. The Saints women’s cross country team led the league with 15 selections, the women’s track and field squad paced the school with 21 honorees, and the Saints baseball team topped all men’s squads with 20. In addition, 11 Saints student-athletes posted perfect 4.0 GPAs.

Council of Presidents’ Academic Excellence AwardsTwenty-two Maryville student-athletes were named as recipients of the Council of Presidents’ Academic Excellence awards for the 2013-14 school year. The prestigious award is given to student-athletes who have exhausted their athletic eligibility in their respective sport, played at least two seasons in the GLVC, completed 96 credit hours and maintained a 3.5 cumulative grade point average throughout their academic career. A league record 290 student-athletes earned the award this season. Maryville’s total of 22 honorees tied for the fourth highest in the GLVC this year. Last season, the Saints placed 16 senior student-athletes on the award list.

This marks the second straight season and fourth time in five years as members of the GLVC that Maryville has had at least 10 teams recognized by the conference. Maryville reached double-digits in 2009-10, was the conference’s sole 10-team school in 2010-11, and had 10 teams honored in 2012-13.