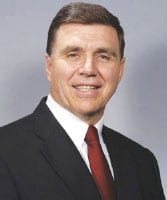 (ST. LOUIS, MO) – Maryville University has announced its intention to field a varsity wrestling program that will compete in NCAA Division II as an independent during the 2011-2012 competitive season. The University has hired legendary wrestling coach Mike Denney to establish the team, effective June 1, 2011.

Denney, whose teams have won three-consecutive NCAA titles and six NCAA Division II National Championships the past eight seasons, most recently coached at the University of Nebraska Omaha (UNO). UNO recently announced that it will eliminate its wrestling program as a result of joining NCAA Division I athletics next year.

“Maryville is faced with an extraordinary opportunity, to say the least,” said Mark Lombardi, PhD, president of Maryville. “To create a new varsity athletic program and turn it over to the best coach in our nation is certainly a coup for our University. We enthusiastically welcome Coach Denney to our Maryville community and to St. Louis, and look forward to the beginning of a winning wrestling tradition.”

Denney recently was voted 2011 InterMat Coach of the Year. This award recognizes the top college wrestling coach across all NCAA divisions as determined by a vote by InterMat writers and executives. He was named the NCAA Division II Wrestling Coach of the Year in 1981, 1991 and 2009.

“It isn’t every day that an experienced coach gets the chance to create a college wrestling program from scratch, but that’s exactly the opportunity I’ve been blessed to receive at Maryville University,” said Denney.  “I’m excited to move to Maryville, along with many of my current student-athletes, so we can replicate the type of success we’ve had in Omaha in St. Louis.  A lot of hard work lies ahead in establishing our new program, but we’re confident in our ability to maintain high standards of excellence for our student-athletes on and off the mat.”

Denney, who is known for his positive approach and his perseverance, believes that success in coaching results from passion for one’s work. His philosophy is evidenced by the academic achievements of his wrestlers: 47 have been recognized as NCAA Division II Wrestling Coaches Association Academic All-Americans during his coaching tenure at UNO.

About Maryville University
Founded in 1872, Maryville University is a four-year, private university located in St. Louis, Missouri and ranked by US News & World Report as one of America’s Best Colleges in the Regional Universities – Midwest category. Maryville University students may choose from 50 academic programs, including degrees at the bachelor’s, master’s and doctoral levels. Approximately 3,700 students are enrolled through the College of Arts and Sciences, the John E. Simon School of Business, the School of Health Professions and the School of Education.

Maryville is completing its Provisional Year in the reclassification to NCAA Division II athletics. This is the final step/ year before Maryville moves to full active Division II membership, in reclassifying its 17 intercollegiate teams from Division III to Division II.

Maryville had been a member of NCAA Division III since 1978, and 2008-2009 was its final year of affiliation with the St. Louis Intercollegiate Athletic Conference. Over its 30-year history, Saints athletic program teams have made 15 appearances in NCAA post-season tournaments.