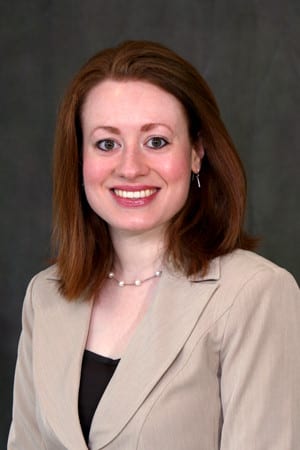 [St. Louis, Mo.] – Maryville University has announced a new affiliation with Hillel International, the largest Jewish student organization in the world. The creation of a Maryville University Hillel marks the first time more than one Hillel will be serving students in the St. Louis community.

The announcement follows concerted efforts by Maryville in recent years to create a more welcoming environment for Jewish students, through expanded programming and a growing presence in the Jewish community at large. A Jewish Student Union (JSU) was formed in 2010, and the Kranzberg Family Foundation has provided funding over the past five years to hire and retain a Jewish programming facilitator to engage young adults. Since 2012, this position has been held by Erin Schreiber, a former assistant director of St. Louis Hillel at Washington University. Schreiber will be the new Hillel manager.

Numerous faculty and staff members worked toward helping the Maryville JSU become the newest Hillel, a distinction the University hopes will provide added assurance to families that students will find a Jewish “home” on campus. Maryville’s recent ranking as a national university makes it even more imperative that Jewish students from out-of-state have a place to celebrate traditions away from their families.

Maryville sophomore Arin Simon, an education student from Denver, Colo., has actively participated in the Jewish Student Union and looks forward to having a Hillel on campus.  “I can’t wait to have a place at Maryville that I can go to just be Jewish, and be with others who are as well,” she said.

The University’s initial inquiry to the Hillel International organization was warmly received. “They felt that we were already ahead of many other universities in creating a model of Jewish student life that others could follow,” Schreiber said.

“We are very excited to be expanding Hillel’s work on campus to Maryville University,” said Hal Ossman, Hillel International’s chief campus officer. “The university leadership showed great commitment to building a strong Jewish community at Maryville and we believe the new Maryville University Hillel will continue a great tradition of Jewish student life in St. Louis.”

To become an affiliate, Maryville underwent a rigorous review process—including submission of a formal application, and an interview that delved into the University’s cultural climate and rationale for becoming a Hillel. The affiliation agreement was approved through a vote by the Hillel International Board of Directors.

Tom Eschen, Maryville’s vice president for institutional advancement, feels the new Maryville Hillel supports the goal of diversity and inclusion, which is a central theme of the University’s strategic plan.

“The new Maryville Hillel is just the latest in a series of programs and initiatives designed to serve Maryville’s growing Jewish community of students, faculty, staff and alumni. We want Maryville to be a real first choice option for Jewish students of all ages, based on our academic programs and also our culture,” Eschen said. “Students of all religious backgrounds thrive at Maryville and diversity is a key goal. It’s what the real world looks like and it reflects the long-standing values of Maryville University. ”

Schreiber foresees a smooth transition for St. Louis’s newest Hillel, which will open when the fall semester begins in August. “We’re proud to become the Maryville University Hillel and share our celebrations, warmth and sense of community with an expanded network from across the country and the world,” she said.