George Will to Appear in St. Louis Speakers Series; Fills in for Noonan 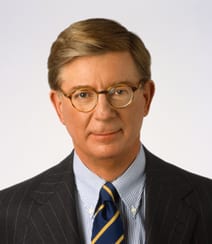 Maryville University has announced that Pulitzer Prize-winning columnist George Will replaces Peggy Noonan for the St. Louis Speakers Series event on Tuesday, Feb. 22, at Powell Hall at 8:00 p.m.. Noonan had to cancel her appearance when she was called upon to cover events taking place in the Middle East.

IMPORTANT TICKET INFORMATION: Noonan’s appearance in the series had previously been rescheduled from January to February in hopes that the later date would accommodate her schedule. Please note that tickets originally printed for the “Lisa Ling” talk, dated for Feb. 22, will be honored for this month’s lecture with George Will.

Will has been called “perhaps the most powerful journalist in America” by the Wall Street Journal.  In a career that has spanned more than 35 years, he is one of the most-read columnists in our country. His newspaper column has been syndicated by The Washington Post since 1974. Today it appears twice weekly in approximately 400 newspapers in the United States and in Europe. In 1976, he became a regular contributing editor of Newsweek magazine, for which he provides a bimonthly essay. In 1981, Will became a founding panel member on ABC television’s This Week.

In 1977, Will won a Pulitzer Prize for commentary in his newspaper columns. Altogether eight collections of Will’s Newsweek and Washington Post columns have been published, the most recent being One Man’s America. In 1990, Will published Men At Work: The Craft of Baseball, which topped The New York Times best-seller list for two months and was recently reissued as a 20th Anniversary special edition.

In 1998, Scribner published Bunts: Curt Flood, Camden Yards, Pete Rose and Other Reflections on Baseball, a best-selling collection of new and previously published writings by Will on baseball. Will was a member of Major League Baseball’s Blue Ribbon Panel, examining baseball economics.

Born in Champaign, Ill., Will was educated at Trinity College in Hartford, Connecticut, Oxford University and Princeton University, where he earned his PhD. He has taught political philosophy at Michigan State University, the University of Toronto and Harvard
University. Will served as a staff member in the United States Senate from 1970 to 1972. From 1973 through 1976, he was the Washington editor of National Review magazine.