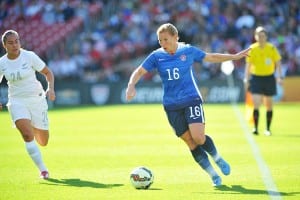 Chalupny, who has served as a Saints assistant coach for the past two seasons, played at Nerinx Hall High School in Webster Groves, Mo., and collegiately at the University of North Carolina where she was a three-time All-American. She is playing professionally in the National Women’s Soccer League for the Chicago Red Stars.

The World Cup Championship is the latest honor in Chalupny’s standout playing career. She was a member of the 2002 United States Under-19 World Championship Team and won a gold medal when she played for the USA in the 2008 Beijing Summer Olympics and scored a goal in a 4-2 victory over Japan in the semifinals.

The Maryville women’s soccer team begins its season Sept. 4, in a tournament in Florida, and the first home game for the Saints is Sunday, Sept. 13, as they host Quincy in a Noon contest.