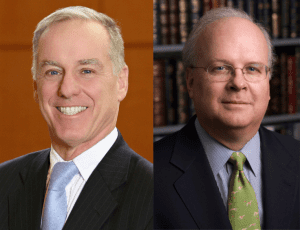 The St. Louis Speakers Series, presented by Maryville University, features an impressive lineup of authors, journalists and leaders for the 2010-2011 season, including political heavyweights Karl Rove and Howard Dean, who will take part in the series’ first-ever debate.

“This year is going to be different than any other year we’ve had before,” said Bill Conrow, president and founder of the series. “While all of our speakers are unique, we are extremely excited about the introduction of a debate with two of the most well-known and highly respected men in the political world. It is our hope that this is just the first of many powerhouse debates to come to the series in the future.”

“This season provides an incredible opportunity for the students, faculty and St. Louis community to hear some of the great thinkers and leaders of this time,” said Mark Lombardi, PhD, president of Maryville University.

Closing out the series on April 19, the face-off will feature individual commentary by Karl Rove and Howard Dean as they discuss their personal experiences in the political realm. Rove is former deputy chief of staff and senior advisor for the Bush administration and Dean is a former Vermont governor and candidate for the 2004 Democratic presidential nomination. In true form, the debate will include an opportunity for each to respond to the other’s presentation, as well as a period for audience questions.

All of the presentations, with the exception of Noonan’s, will take place on Tuesday nights at Powell Symphony Hall, beginning at 8 p.m. Tickets are sold by series subscription only and prices range from $285 to $420 per person. Interested parties are encouraged to contact the ticket office as soon as possible to order their seats.

Maryville University is a private institution located in west St. Louis County. Ranked by U.S. News & World Report as one of America’s Best Colleges in the Masters-Midwest category, Maryville University students may choose from 50 academic programs, including degrees at the bachelor’s, master’s and doctoral levels. Among recent graduates, 82 percent are employed or attending graduate school. More than 16,000 Maryville alumni work and live in the St. Louis region. For information, visit maryville.edu.